I Made My Dad a Recycled Father's Day Card :) 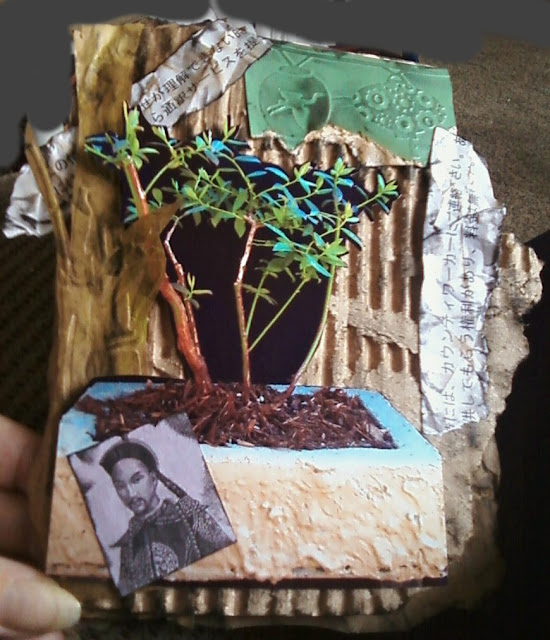 Happy Father's Day to all the fathers of the world!


I thought I would share the Father's Day card I made my dad this year, so I took pics before sending it out. Except for one teensy bit of clip art, this card is made of entirely recycled/upcycled materials and is an All The World Is Art (Joan McCray) original, lol. This is in keeping with my motto "When you care enough to send what could have been trash."


My dad loves and makes bonsai, hence the Oriental bonsai theme. In fact, the cut-out bonsai photo is from a photo he took of one of his bonsai and the planter he made from scratch for it. He was going to throw the photo out, can you imagine that? But long ago I begged him to save his toss-off photos for me for future use. :) Knowing my tendency toward thinking of most anything as an art material, he and my mom obliged (likely rolling their eyes a little in the process, ha ha.)


When he saw the result, though, I'm told he smiled (yay :) and that he said it was cool, and seemed pleased I had incorporated one of his cast-offs in his card. "I knew you would do something like this with those," he said.


I incorporated several materials and items into the making of this card:

-  I cut up the cardboard from a box that used to contain sticks of butter for the base of the card,  into a shape and size I liked. 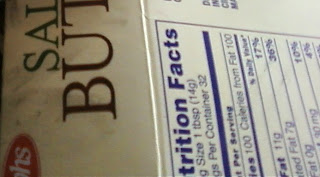 -  I tore apart and cut, inked and otherwise distressed the packaging from something I got mailed the other day and glued that on top of the front of the card base. 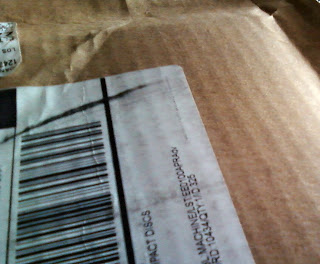 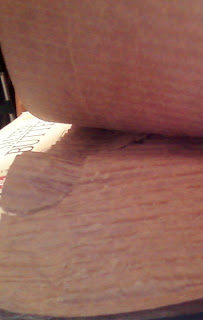 -  I tore off the Oriental writing from a piece of government junk mail I had saved. I crumpled it all up really tight to distress it, then inked the strip with black mostly on the sides. I tore that piece in 2, placing one vertically on the right side of the card (letting it hang off the right side of the card base) and the other diagonally on the left side, woven beneath the bonsai photo and behind the bamboo stalks.

-  I took out my Sizzix Textured Impressions machine I so enjoy (and got WAY CHEAP of course, lol.)
I embossed a green painter's chip sample somebody had given me 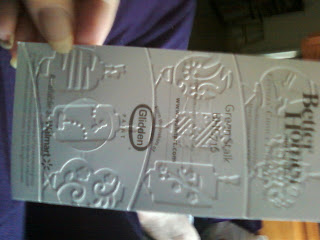 with an Oriental lanterns embossing folder. Wow! I found out these folders work great on paint cardboard samples! The results are so sharp, crisp and clean! 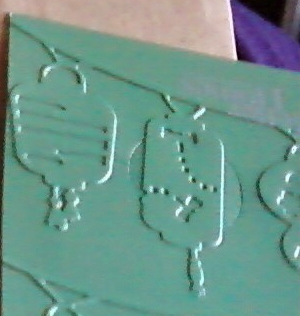 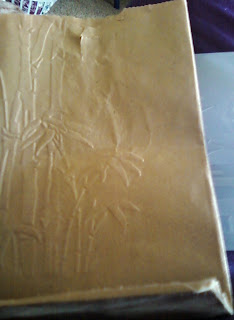 -  Using a different folder, I embossed several bamboo stalks onto a brown paper lunch sack (that never held food, just something else I can't remember so I saved it :) ) Then I inked the raised bamboo stalks with lime green, black and brown inks. I cut around and tore a few stalks from the much larger embossed area and glued my selection to the left on the card face, making sure the stalks rested over the diagonal Oriental writing, yet behind the bonsai I had cut out. I always figure the more layering the better :) I let the Oriental writing strip go long off the left side of the card, because I like that it seems to add more dimension.


-  I took my dad's 4x6" glossy photo of one of his many bonsai and started clipping with normal scissors all around the bonsai itself. (I of course saved all those glossy pieces of photograph I clipped off, for other projects.) I glued the bonsai in a location I liked on the card front, making sure some of the bamboo stalks rested on top of the bonsai to add dimension. I left some of the dark border from the photograph on the cut-out to make it pop out on the card.


-  I found the Oriental-theme page from the "Artsy Collage Travel" book by Paper Queens. I chose the man's face because I figure he was likely a dad himself. :) I cut around the picture. I distressed it by inking with black ink around the edges. Then I glued it askance on the bottom left of the card.


I will be posting a printed version of this card (and many others of my designs) in my new store when I can get it open. I am also creating original digital download scrapbook and arts/crafts papers from some of the components, so I'll keep you posted when those will be available.


Have an artsy craftsy day!
Joan


Related articles:
You might also like the free scrapbook offerings on this site, (fonts, downloads etc., plus my recent post about distressing, plus also maybe the following: